The Biograph Approach to Editing 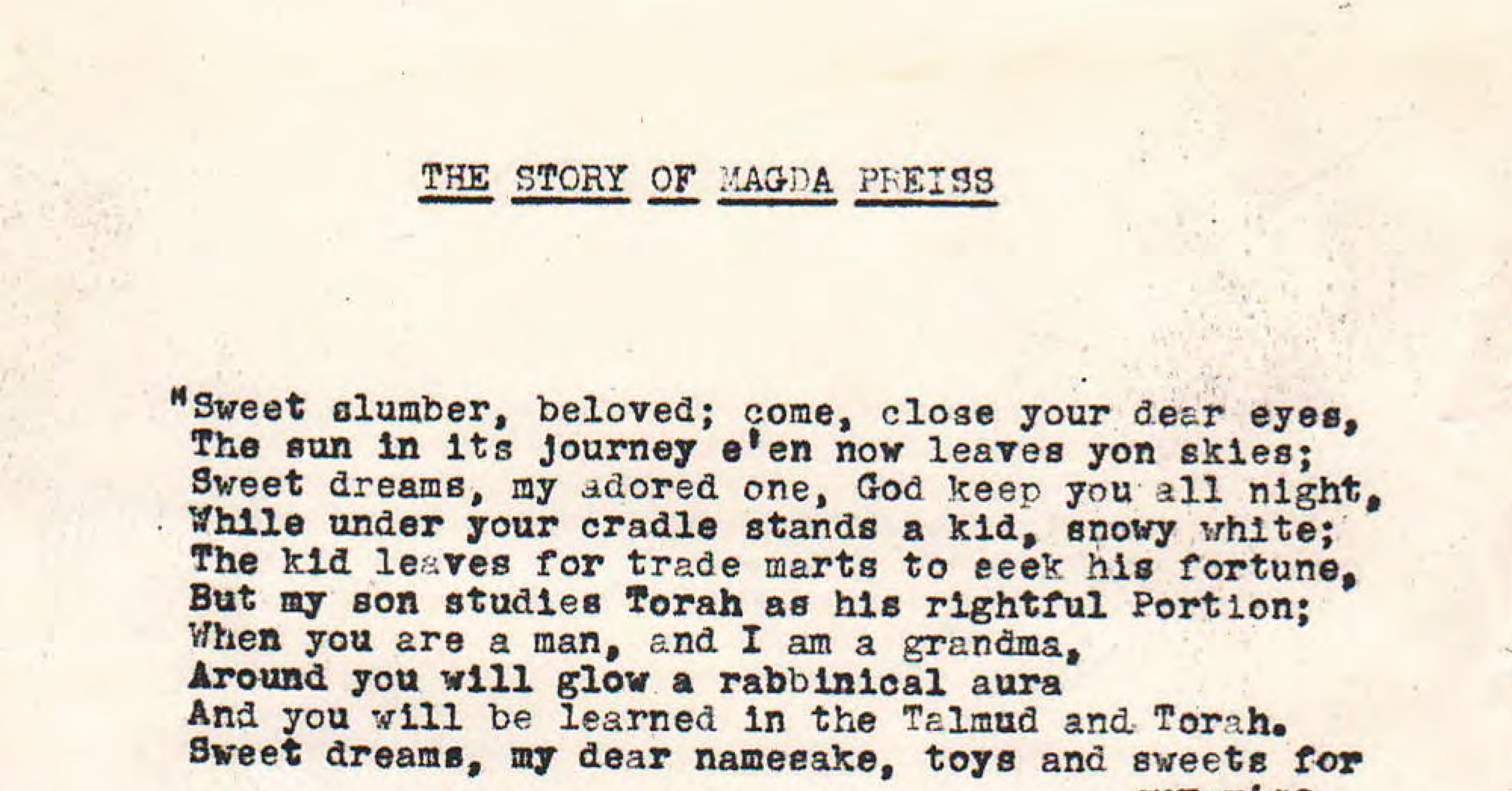 Page one of original manuscript

In the late 1940s, Magda Riederman Schloss decided to tell her life story: burdened with memories from years spent in Nazi concentration camps, she needed to get them out of her. With Magda pacing up and down the room, a friend took down her story, struggling to keep up with the rushing flow of Magda’s language. Though she was using English—her fifth or sixth language—her story poured out with passion, detail, and immediacy. She told of her idyllic childhood in a prosperous Jewish family in Hungary; she detailed her passionate romance with the elegant and charming Gustav Preiss; how at the age of 18, she married him—and, fatefully, decided to stay with him in Hungary when her family fled the dark shadow of fascism falling across Europe for the United States. Then, her tale turned darker: she described life in occupied Czechoslovakia, the creeping imposition of restrictions on Jewish life; her journey to Auschwitz and her life in the camp; and the most miraculous fact of all—that she had survived the terror and brutality of the Nazi death camps. And that she had done so without losing her pride, her dignity, her love of life.

It was a remarkable story—and not just because of the rich detail and immediacy of Magda’s story. In preliminary research, the Holocaust scholar Alissa Schapiro has estimated that some 12,000 memoirs have been published by survivors since the camps were liberated. Of these, less than 200 hundred were published by women*. And less than ten were published in the five years immediately after the war. Magda’s story is a rare and precious historical document—almost unique among the vast body of Holocaust literature. It ought to be celebrated by scholars and widely read, a vital and vibrant voice that brings the past to life. Yet, it was almost lost to history.

Magda shopped her manuscript around to publishers in the years after she dictated the book. None of them were interested. Eventually, she shelved the project. Her story remained in a single type-written copy; later, a family member scanned it into a computer and generated a pdf. There it rested, a corrupted, largely illegible file on a virus-ridden hard drive. Magda’s voice was in danger of slipping out of history entirely. 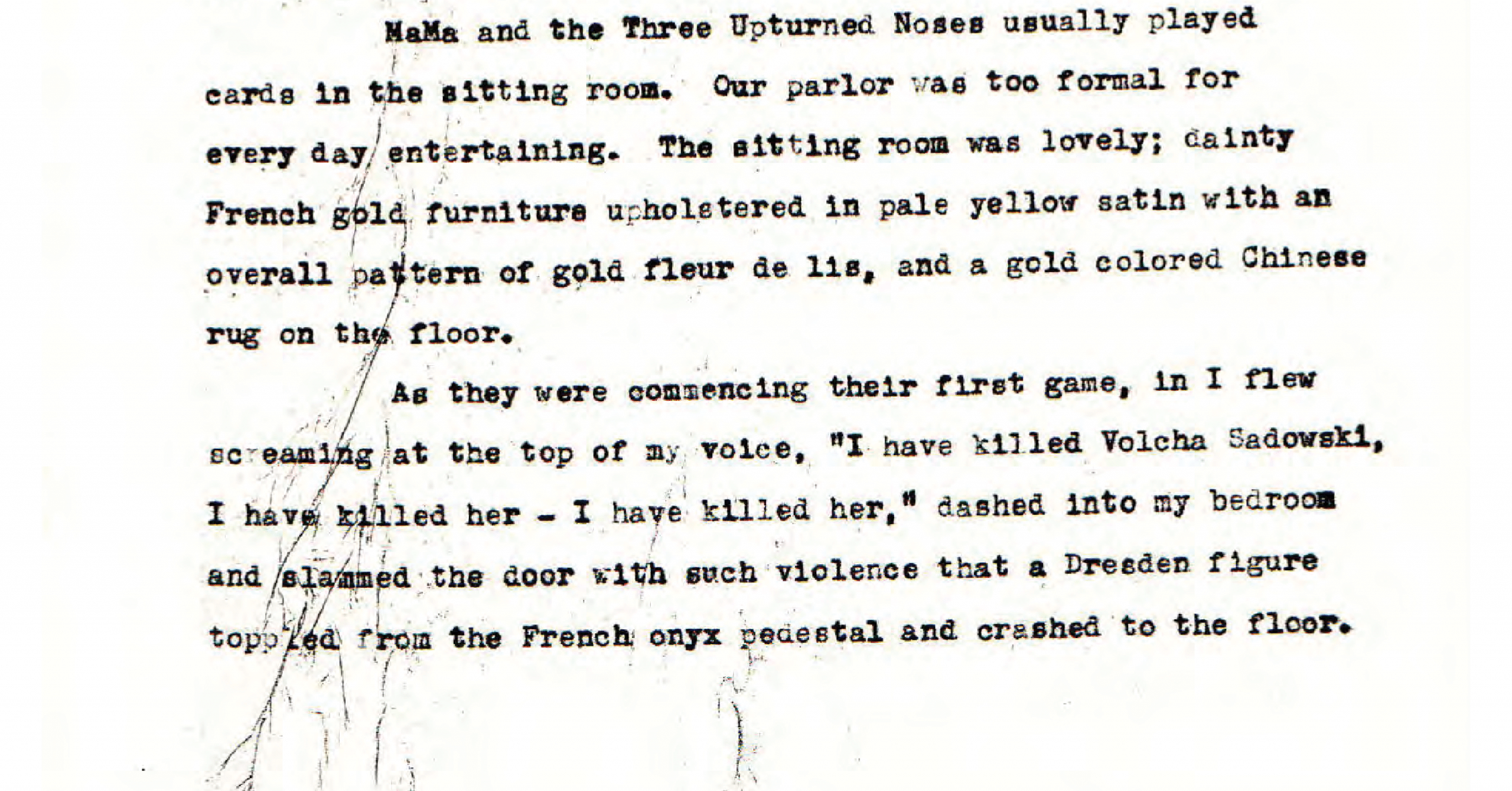 Cracked pages from the original manuscript

In 2018, Billy Schloss, Magda’s son, was walking out of Yom Kippur services when he ran into AJ Greenberg. Billy had seen AJ grow up from across the cul-de-sac they shared. They started in on the obligatory small talk—the weather, then, AJ’s new business, bioGraph. AJ rattled off his elevator pitch—“We preserve stories—we think of it as pre-serving, because we’re serving generations to come by creating these heirlooms.” A figurative lightbulb went off in Billy’s head “Could I send you something my mom wrote?” he asked. “I’m not sure if it’s any good. Take a look at it and tell me if you can do something with it.”

Two years later, Magda’s book has been published in a handsome paperback volume by bioGraph. Her story is being heard around the world: reviewed in local Jewish newspapers, collected in international Holocaust libraries, populating the feed of Instagram influencers. This vital and rare historical resource has been given the life it always deserved. This is the story of how that happened—how Aaron and AJ, the co-founders of bioGraph, transformed a corrupted, illegible pdf into a living testament to Magda’s spirit.

Bringing Magda’s Story Back to Life, Word by Word

Reflecting on the long, difficult labor of editing, designing, and publishing Magda’s book, AJ notes, “It was important to not only get it right according to our own standards, but making sure that Aunt Vivian (Magda’s younger sister) and Billy and those who knew Magda best also felt we were doing justice to her story.”

The challenges to doing so, however, were immense. The first step was to restore and retype the file. It was in bad shape, barely legible. Billy confessed to AJ that he hadn’t read all of it—it was just too hard to get through in its present condition. Aaron and AJ went through the text line by line, word by word, laboriously reading and re-reading, typing and retyping the torn pages and smudged words to arrive at a usable first draft of Magda’s story.

Even this initial work had a kind of magic to it—typing out Magda’s story word by word, Aaron and AJ could feel the immediacy and power of Magda’s language. In turn, the story’s power increased the sense of responsibility they felt to get each detail right. With a legible text to work with, the brothers dove into a new set of challenges—an infinity of choices, edits, and possibilities, each invested with the full weight of Magda’s story.

Take an apparently straightforward sentence, early in the text: “Mama was a woman of great charm and beauty,” Magda says, describing her mother. Aaron and AJ spent hours discussing the word “was.” Of course, Magda’s “Mama” was still alive when she wrote the book—so should it read “Mama is a woman…”? Aaron and AJ had to reckon with the complicated temporality of the book: Magda wrote the story in Rock Island, Illinois in the late 1940s, but recounts her childhood in the 1920s and ’30s in Budapest. Questions like this one arose on every page: with every verb, Aaron and AJ had to make sure it corresponded with the flow of the narrative.

At the same time, Aaron and AJ had to keep in mind contemporary readers of the book. On the next page, a simple sentence raised some problems: “A childhood friend Magda Hershkowitz was always given evil, sinister roles to perform, for she was fat.” In the parlance of the 1940s, this makes sense; no one would bat an eye at an archaic formulation like, “For she was fat.” But for a modern reader, it sounds stilted; it might put them off the book altogether. Throughout the book, Aaron and AJ decided that they would streamline any unnecessarily old-fashioned language, inviting modern readers in—ensuring that Magda’s story resounds as loudly as possible in the present. 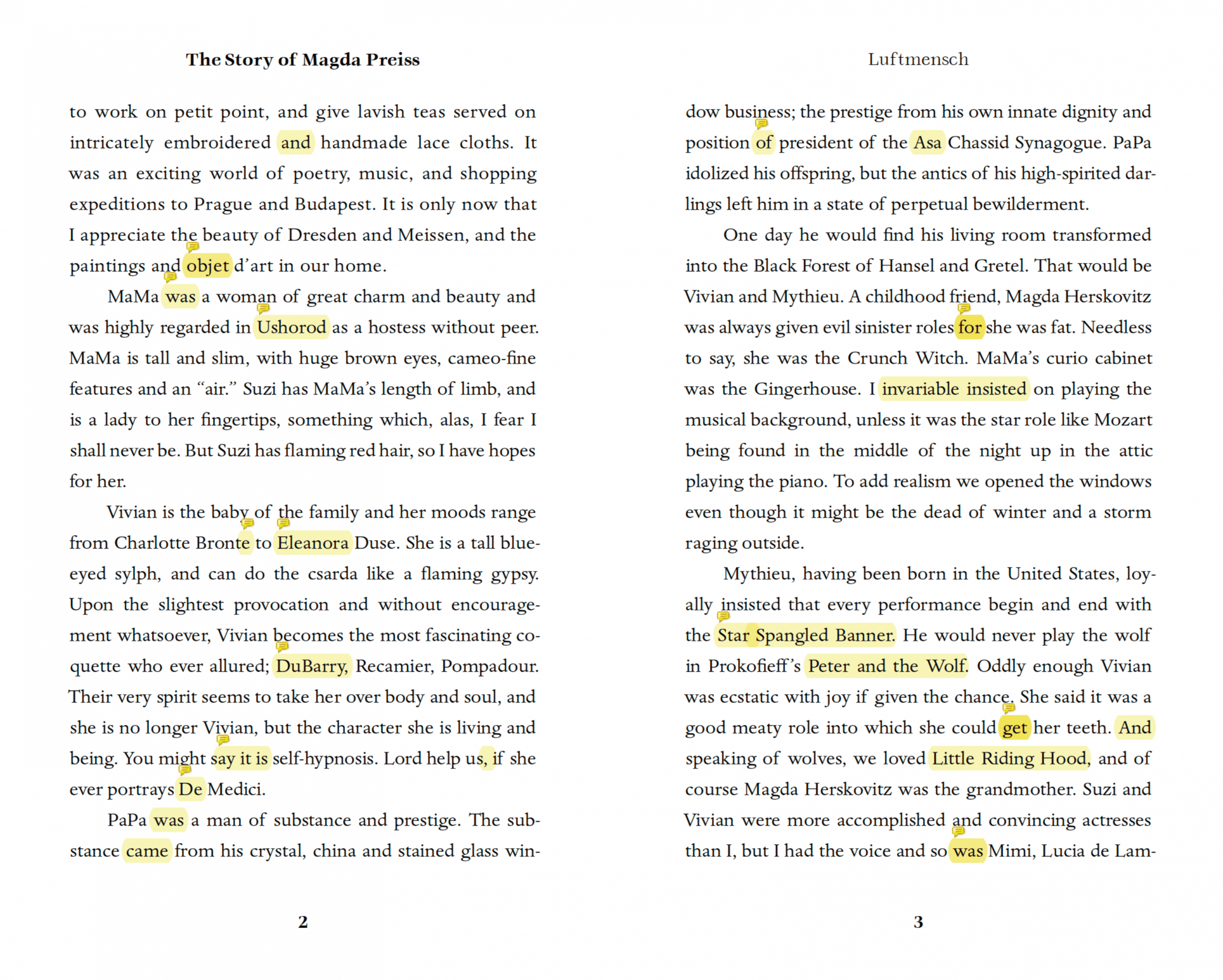 Sample edits of the manuscript

From Manuscript to Book

Even as Aaron and AJ obsessed over these tiny details, each page filling up with their marginal comments and notes to each other, they also had to shape the book as a whole. The manuscript they received did not have chapter titles. Indeed, it didn’t even have a title. In order to present this story and frame it for contemporary readers, they needed to divide the text into chapters—a difficult and delicate task. In a piece of music, the rests are just as important as the notes; in a book, the pauses, spaces, and silences are key to the meaning and the rhythm of the text. The chapters needed to amplify Magda’s concerns, while, at the same time, making them legible to the reader. More, they had to be specific—but also broad enough to contain what was inside of them. For example, during Magda’s description of her time in the Braunschweig concentration camp, she pauses to wonder which of her friends will die within the next year: “I prayed for forgiveness of my sins, and I prayed to be inscribed in the Book of Life.” That passage—so moving in its reflection on Jewish values and religious practices, even in the midst of a Nazi death camp—struck Aaron and AJ; it reminded them of the prayers that Jews say each year at Yom Kippur. They took it as the title for a chapter, which became “Book of Life.” They ended the previous chapter, “Stalin’s Candles,” with a powerful and foreboding statement, “We never knew who was going to be next.” The line both powerfully consummated what preceded it while also preparing the reader for what follows, dividing Magda’s experience into manageable, intelligible chunks. Such choices reflect the ambition of the book: that it might join together past and present, might help its readers find themselves in Magda’s experiences.

Similarly, Aaron and AJ carefully considered the best title for the book. Vivian, Magda’s sister, recalled that Magda wanted to title it Up the Chimney in Smoke. In the 1940s, that might have been an effective title for a Holocaust memoir. But in 2020, there are more than 12,000 Holocaust memoirs—and many of them have titles that reference chimneys and smoke. They worried that the unique character of Magda’s manuscript would be lost if they kept the original title. And they were struck with Magda’s sensitivity to estrangement: feeling estranged from oneself and from one’s country. Her meditations on this sense of loss become one of the book’s central themes. They offered the title We Were Strangers to call the reader’s attention to Magda’s humane, sensitive prose—and to demonstrate that this was not “just another Holocaust book.”

As Aaron and AJ prepared the book for publication, they scrupulously fact-checked it. They went over little details—how to spell the names of Hungarian towns; how to transliterate Hebrew prayers—calling in experts when they found themselves dealing with particularly tricky technical questions. And they also fact-checked all of Magda’s claims about her experience in the camps. It might seem strange to do so—after all, who would know better than Magda what happened to her? But, as they knew from working with the Illinois Holocaust Museum on a previous project, Holocaust memoirs can be twisted and misused by conspiracy theorists and Holocaust deniers: if one detail is wrong, they’ll get on Twitter and say the whole thing is a fabrication. So the editors checked Magda’s Auschwitz tattoo, zooming in on a freeze-frame from a video she made for the USC Shoah Foundation in the 1990s to check it against the text. When Magda claims that “Kartoffelbunkers”—potato storage sheds—“ran alongside the Auschwitz railroad I had helped to build,” they consulted a map of Auschwitz to confirm that they really did. It was important to them to get the details right, to make sure that Magda’s story couldn’t be used for malicious purposes. 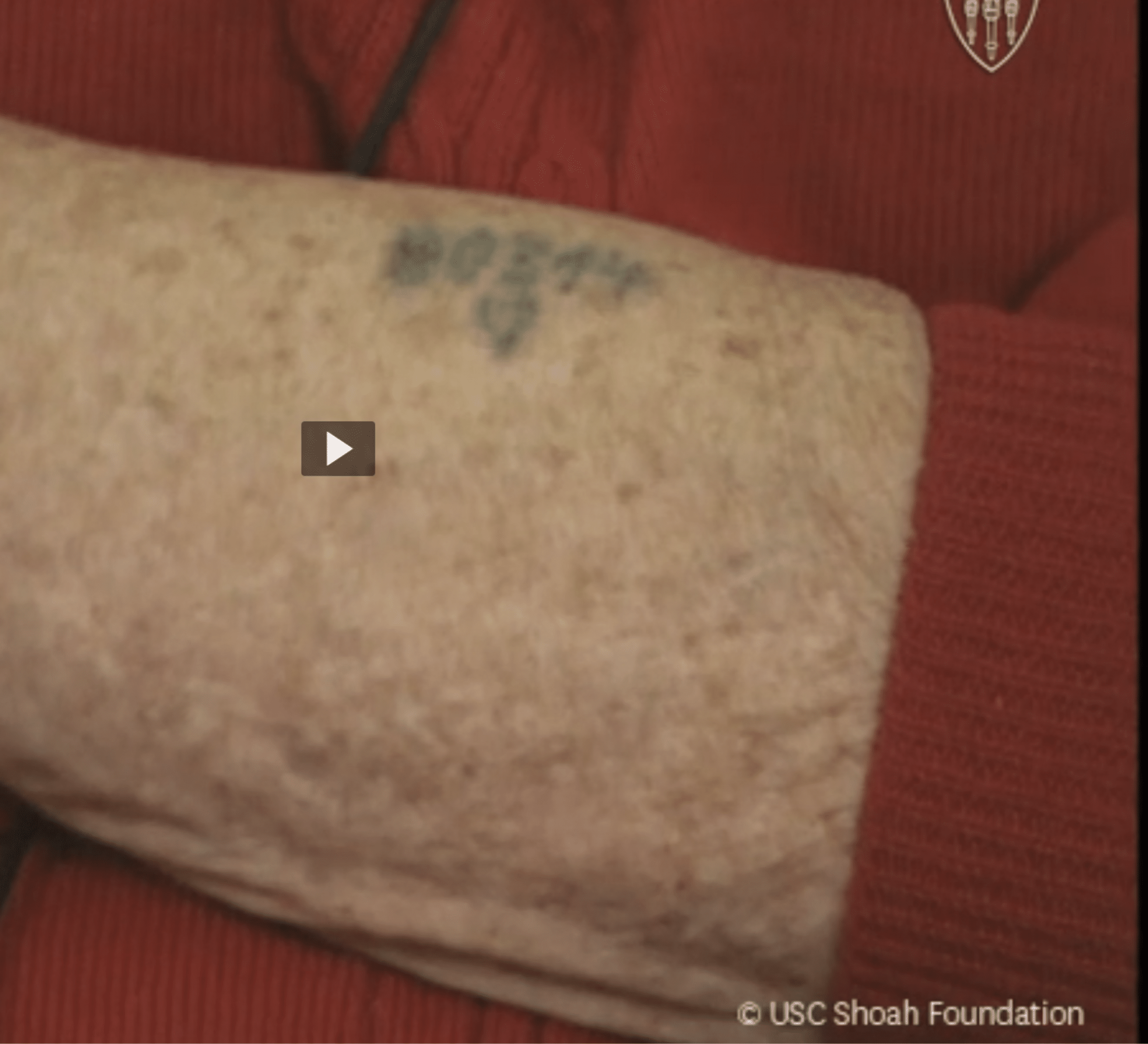 Equally, it was important to make sure that each detail of the book reinforced her deep connection to Jewish faith and Jewish history—a connection that sustained her in the camps. Even an apparently mundane matter, like the typefaces, became a tool they could use to emphasize that connection. They used the font ITC Veljovic for the book’s headings. It’s a good-looking font, but not particularly showy or ostentatious; few readers will notice or pause over the choice. But the font comes out of a long tradition of Jewish typography, beginning with Henry Friedlaender and the Hadassah Printing School. (Indeed, Magda first told her story at a Hadassah House). As Magda describes a tradition of Jewish perseverance and resistance, the type of the book quietly supports her message: itself a witness to the continuity of Jewish intellectual and cultural traditions. 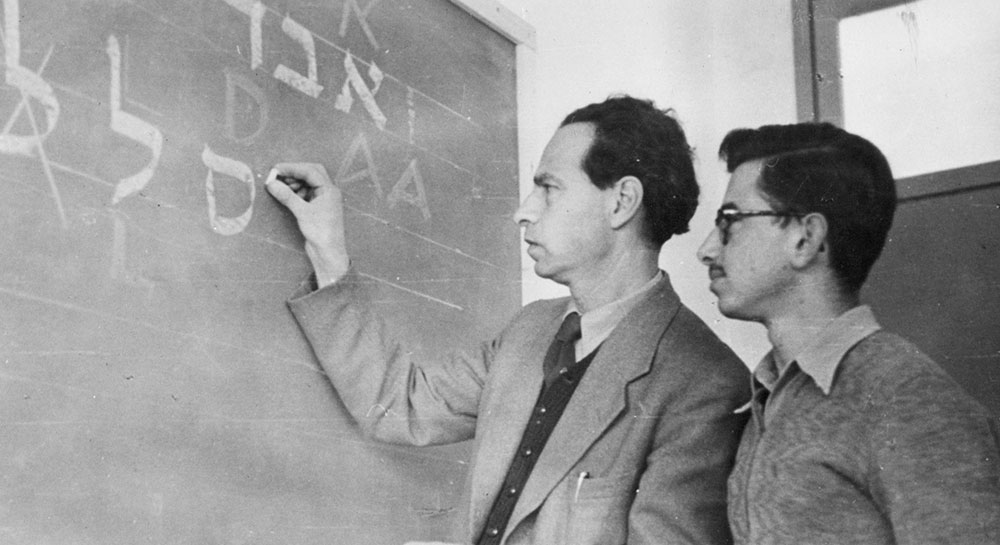 From retyping the manuscript to designing it, from securing it at the Library of Congress to producing an audiobook and marketing it worldwide, Aaron and AJ worked to create a book worthy of Magda’s story and her spirit. They wanted her book to articulate her values, resonate in the present, and speak to future generations. bioGraph applies that level of care to each decision that goes into our books—working word by word, letter by letter. We ensure that your book is not just beautiful, but meaningful: an expression of your values and your voice.