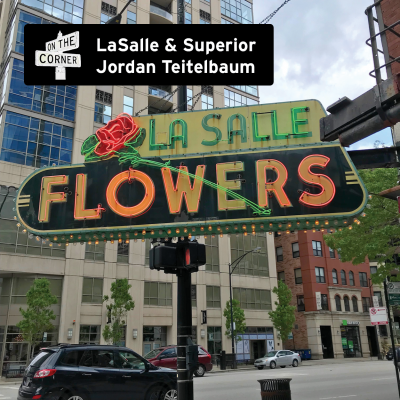 My little sister was handing me off to my little brother, since neither of the three of us trusted me to find my way those seven city blocks from her apartment to his. Downtown was fancier than I remember; then again, I had been gone from Chicago for almost a decade. I was by no means fancy, either. I drove in from Central Ohio via Southern Indiana, for instance – nothing fancy about that.

I was in town for a professional conference. I’m an Ear, Nose, & Throat specialist now. Back on that corner, I was well on my way to becoming a sinus surgeon but the actual practice seemed intangible. That’s the way residency often is, when your pager blares at you in the middle of the night. “Be right there,” as you get dressed and drive to the ER in zero traffic at 1:30am. Still, I know I have led a life of opportunity and schooling, and I am both proud and grateful to get to do what I do.

Strangeness stirred inside me as my siblings made the exchange. I was not paying attention to either of them as they chatted. The trendy restaurants, bars, sounds, cabs whirring by, and ‘cool city people’ reflected in my wide pupils as I starred like an outsider. I’m born and raised 20 miles from the city, it’s really the only city I have ever known. This particular part wasn’t even my favorite, it was just an equidistant meeting spot between both of my siblings’ places.

In fact, they have both since moved. And yet, standing between their homes, a certain deep subconscious part of me knew how left out I felt with two-thirds of our crew living in the same city sphere and me – the lonely thirty-three point three-repeating – off on my own. The out-of-towner who happened to be in town.

Well, I was not exactly off on my own – I had a wife and two daughters by this time. And I missed them every hour I was away learning and networking and elevating my career. But thinking of them was even more reason to compel me and propel me back towards the heart of our family.

It was September in Chicago and the weather was perfect for all the suits I packed. I had dragged them inside on hangers with multiple tie choices for each shirt up to my sister’s condo. Then I put on a fresh T to head to my brother’s to watch Thursday Night Football before the conference opened the next morning. I was even presenting, but I was not apprehensive. The only uneasy feeling I had was looking up at these luxury apartment buildings, clearly constructed since I had left for my education and training, and wondering how and when I could reclaim this city as my own.

About the Author
Jordan Teitelbaum, D.O., is an Otolaryngology (ENT) specialist working in the Chicagoland area. He recently completed a Rhinology/Endoscopic Skull Base Surgery fellowship at Duke University. He was born and raised in Chicago and majored in English at the University of Michigan prior to completing medical school in Harlem, NYC and residency in Columbus, OH. He is grateful for the opportunity to express himself through prose and poetry. He also truly appreciates the chance to read others’ creative work which helps maintain a persistent connection to his roots.