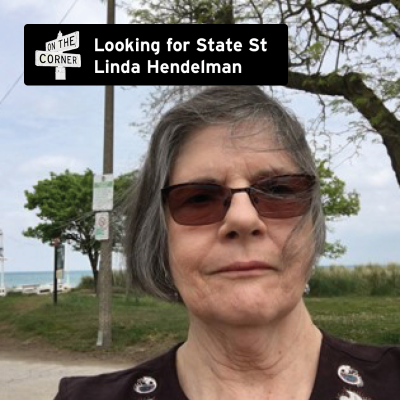 Chicago, Chicago I will show you around…

On State street that great street I just want to say

They do things that they don’t do on Broadway…

Chicagoans always get a chuckle when I tell them I got lost looking for State Street. I came to Chicago in 1971 from a rural area in Virginia. I had visited Chicago a few times before moving here but finding my way around the city on my own proved challenging. I have a poor sense of direction but getting around East Rogers Park where I lived was easy and I often hopped on the red line a few blocks away to shop downtown.

One evening in late August my boyfriend asked me to meet him at a friend’s condo on State Street. Just take the Outer Drive he said, you can’t miss. I left work at 10 p.m. and headed east on Touhy to Sheridan Road and the Outer Drive. No problem and not much traffic for a Saturday night. North Avenue, I thought, would intersect with State Street right off the exit. However, when I didn’t see State, I took several turns left and what I thought was east but I couldn’t see the lake, so I had lost my compass (“the lake is always east,” I knew). I wasn’t sure which way was north either. I made a few more turns trying to get back to the Outer Drive.

I kept driving and turning but realized I was lost. I had no idea where I was and it was getting late. The area was mostly empty lots and no commercial businesses, just an occasional gas station. I knew I had to stop and ask directions. Surely most Chicagoans could help me find State Street.

It was almost midnight when I found a gas station with a light on. I turned off the motor but as I reached for the car door, a pack of dogs descended on the car, barking, snarling, and growling. Running right behind them was an African-American man. He indicated I should roll down my window but stay in the car.

“I’m a little lost,” I replied apologetically. “I’m actually looking for this address on State Street.”

“You’re not even close,” he said, “and you should not be here on a Saturday night.” He gave me directions to get back to the Outer Drive. Then he gave me a stern warning, “Roll up your window, lady, drive like hell, and don’t stop for nobody. You hear me?”

“Yes, sir. Thank you so much. I’ll do that.” Fortunately, I made it back to the Outer Drive (without incident) and decided I was too tired to continue looking for State Street and much too tired to party.

The next day, my boyfriend called in the afternoon and asked why I didn’t come to the party. Apologizing, I admitted that I got lost looking for State Street.

Born and bred in Chicago, he laughed, “You got lost looking for State Street? Really? Is that even possible? Chicago streets are on a grid, making navigation around the city easy. . . at least for most people,” he insisted.

About the Author
Linda Hendelman is a freelance writer and editor who loves Chicago, my adopted home town. I love the diversity in Chicago. I am still finding new and surprising things about the city even though I have lived here since 1971. I enjoy reading, cooking, and walking around my neighborhood.