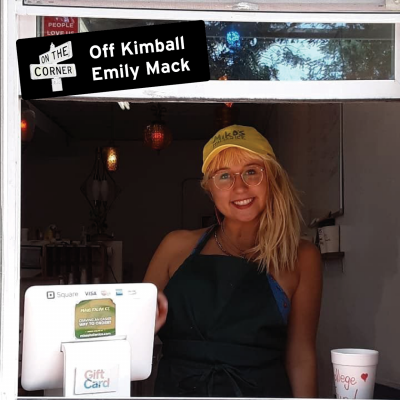 I used to have the perfect summer job: scooping Italian ice. I loved it. The ice stand was a walk-up window on a residential stretch of Kimball Avenue, and I would sit there, perched on a wooden stool with my blonde pigtails sticking out of a yellow baseball cap. On the counter was a styrofoam cup that read College Fund and by the end of each sticky shift, it was fat with crumpled ones and fives. Because scooping Italian ice is so easy and soft that it’s not hard to smile while you do it. It really does feel good to hand someone a cup of something sweet, a cash transaction that’s something close to honest.

I would walk to work. It was a solid three miles from my parents’ house but I had nothing else to do between school years. Plus, it was a straight shot down Kimball. Walking, I passed my old high school and my mother’s old high school too. Except on Sunday mornings, when she would give me a ride and slow the car down just past the intersection at Montrose. And she would point to an old apartment and say, “See the red brick one? Right there, that was your uncle Erich’s first house.” My mom’s brother moved there with his girlfriend when he was eighteen, right down the street from the Italian ice stand. Of course, it wasn’t an Italian ice stand then. It was a little grocery store.

At the Italian ice stand, we sold all-natural flavors made from fresh fruit — no preservatives! Lemon, lime, coconut, strawberry, raspberry, cherry, pineapple, passionfruit, chocolate, even hibiscus… Between customers I would suck glistening cherry ice from a plastic spoon and watch the cars back up down the street during rush hour. One time I watched a fender bender. One time a woman hurried up to the window and bought three quarts of coconut flavor because her friend was dying nearby at Swedish Covenant, lung cancer, she told me. Italian ice was all he could swallow. “I was born in that hospital,” I said without thinking. When she left, I scrubbed out the freezer spotted with sweet day-glo streaks of slush.

Three years later, I was away at college when I heard that my dear aunt Pam, my uncle Erich’s wife, had died. She was so sick. And I remembered suddenly how whenever my mom drives, she points out the car and says things like, “Now there’s where your auntie Pam lived before she met my brother, there with her sisters and her mother who worked at the bakery and God, her mom was so scary then, isn’t that funny to think now? Pam’s mom would toss the pound of unsliced rye at us kids and say — now get out! And there I was, trembling. Crazy how storefronts are always changing.”