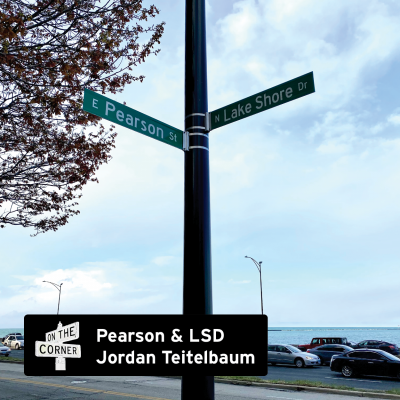 It was exhilarating to be on the lake at night. I grew up in the suburbs – like many who proudly proclaim ‘Chicago!’ when people ask where they are from – and I was not used to calm, darkened water directly in front of me with bustling buildings and traffic in my periphery. The wine was still vibrating me like the El we passed under on our slow stroll here. But the unexpected sex and the refueling of love and lust, the feelings not only buoying to the surface but exploding once they got there, was what really had me buzzing.

I had never lived in city center until that hot summer. I was in medical school taking what is called the ‘final summer break’ between first and second year. Rather than time off in New York City where I was enrolled, I set up a rotation for myself in my real home city, the city second to none. Med students typically do not set foot in an office/hospital until third year, so I saw myself ahead of my time in terms of clinical insight. And I was excited to sublet a place in downtown Chicago and walk to work, check out the scene – live a life I would never before or again live in Chitown.

That night, she rode her bike over from Lincoln Park. I hadn’t seen her in 9 months, but it was not the distance that had fractured our relationship. Years of youthful adoration sprinkled in with tough transitions, family ties, new experiences, missteps and mistakes, broken and regained trust, and factual true love had likely run its course via both nature and nurture. However, this was before ‘It’s Complicated’ was an option on Facebook and way before ‘Swiping Right’ entered into the realm of romantic love.

After an Italian dinner out in the city, rekindling, food and drink, and then two rounds of passionate sex – neither of which I was expecting – I walked her back to Lake Shore. We moved slowly since she was pushing her bicycle, but I also think we were procrastinating to commemorate a past that had escaped us yet had infused itself into our very real present. What was rare is that I knew how special the moment was, taking my time to bid her a safe ride home and savoring a quick but sweet kiss goodnight. Then off she rode.

I did not see her the rest of my summer at home, and I actually have not seen her for nine years since. I did not know that while she sped off on two wheels and I subsequently sloshed home on foot, our relationship of four years would end abruptly after an unforgettable night together. While my heart has moved on, there is still a small room for her. Rather than feel guilty about it, I feel grateful to know that I will always have love for her, for the person she is, and for what her love meant to me.

About the Author
Jordan Teitelbaum, D.O., is an Otolaryngology (ENT) specialist working in the Chicagoland area. He recently completed a Rhinology/Endoscopic Skull Base Surgery fellowship at Duke University. He was born and raised in Chicago and majored in English at the University of Michigan prior to completing medical school in Harlem, NYC and residency in Columbus, OH. He is grateful for the opportunity to express himself through prose and poetry. He also truly appreciates the chance to read others’ creative work which helps maintain a persistent connection to his roots.