Make A Picture Worth A Thousand Words 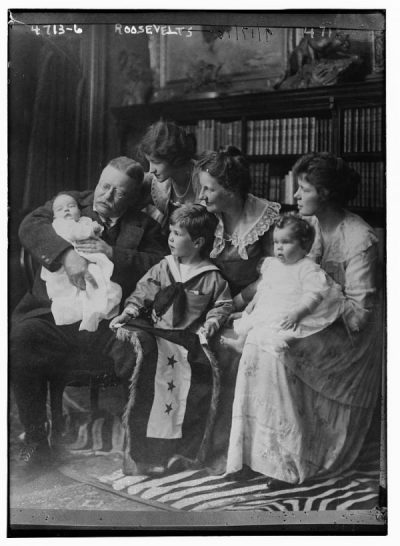 “Grandma, who are all the people in this picture? That guy’s mustache looks funny.”

“I’m glad you asked! Sit down next to me and have a cup of tea while I tell you all about them. These are our fourth cousins. The man on the left is Theodore Roosevelt, the 26th president of the United States. Lots of men had mustaches like his. Did you know he was a cowboy before he became president?”

“Have another cup of tea. We know all sorts of things about him…”

If you’re related to the Roosevelts or another famous dynasty, you needn’t worry about preserving your family’s legacy; countless biographers and historians have already done the work for you. But what if your great-grandfather’s face isn’t carved into a mountain? Is your family’s story any less significant? Of course not. From the hundreds of students your father taught in history class to the countless lives your great-aunt saved as a nurse in wartime, your memories are just as meaningful—only it falls to you to make sure they aren’t forgotten.

“Grandma, who are the people in this picture?”

“That one? Hm. I’m not sure. I found it in a shoebox in the basement a few years ago. My mother never told me.”

“What a shame. Pour another cup of tea, and let’s see what else we can remember.”

For the sake of your children and grandchildren, protecting family photographs and keepsakes is paramount. However, digital images stored on external hard drives, handwritten letters stacked in safes, and ticket stubs stuck in a scrapbook are only the shells of a legacy. Regardless of how many pictures your family is fortunate enough to possess, no number of acid-free photo sleeves can preserve your whole story.

It’s often said that a picture is worth a thousand words, but what’s left unsaid is that a picture without a thousand words is little better than a stock photo of strangers. You can hold a fading family portrait up to the light and squint until you see your heart-shaped face or your brother’s aquiline nose, but on its own, it can’t tell you the stories of the people smiling back at you.

The details that bring a picture to life are lost without context. This critical component of your family’s legacy comes from the people who lived through the moment captured in a photograph—that’s you and those you love. Once you, or perhaps your parents or grandparents, are no longer able to tell the story, it’s lost forever. That’s a tragedy no family should endure, whether or not theirs is a household name.

Preserving these memories was harder before Biograph. It’s not enough to scrawl the names of the people pictured on the back of a photograph or even to drag and drop digital images into a colorful Apple photo book. Without safeguarding context along with the pictures, your job is only halfway done.

If you can’t drag and drop your way to preservation, where do you start?

Enter Biograph. Meaningful conversations add vital context to your treasured photographs. The result is a detailed, narrative caption that encompasses an historical setting and the people who experienced it.

As they begin to think about sharing their family’s story, our clients often find pictures the best place to start. Summing up a life is a monumental task; the basic questions and answers that come from describing one instant frozen in time can jog memories and organically bring to light deeper truths to be shared.

When you bring a collection of photographs to Biograph, you may not already have the background scoop. Particularly if your family lacks an abundance of stories to draw on, our captions bring you into the scene, describing the sights, smells, and sounds of the moment pictured and what they can tell you about the people who lived it. The ancient Greeks had a word for this—ekphrasis, meaning a vivid, often dramatic, description of a visual work of art. We leave drama to the playwrights and poets, but skillfully crafted captions elevate the narrative, enhance knowledge of your ancestors’ lives, and become integral parts of your family’s story.

Take another look at the Roosevelts’ 1918 family portrait. Had you entered the room the day the picture was taken, you might marvel at the conspicuous zebra rug under the chairs. You would learn that Theodore was an avid hunter who embarked on an African safari shortly after completing his second term as president. His expedition returned with thousands of specimens for the biological collections at the United States National Museum and National Zoological Park. This rug might well have come from a zebra Roosevelt hunted himself.

As your eyes move upward, you would see a family at the height of fashion. The younger women—Theodore’s daughter-in-law Grace on the left and his daughter Ethel on the right—sport the popular low pompadour hairstyle, while his wife, Edith, has her dark hair in a bun high atop her head. The women wear dresses adorned with elaborate, lacy collars. Even though Ethel is seated with her baby daughter—another Edith—on her lap, a glimpse of her patterned, tiered skirt shows it’s made of the light, fine materials in vogue that year. Although the picture is black and white, the dress is likely a trendy pastel color. Her delicate exterior hides a strength of character to rival her legendary father. Before Biograph, you might never guess that she previously served as a nurse with the American Ambulance Hospital in France during the First World War.

Like other gentlemen of his era, Theodore wears a three-piece suit and his trademark round, wire-framed glasses. You might raise an eyebrow at his heavy, laced boots, which starkly contrast with the rest of the family’s refined appearance. If these were your relatives, Biograph would hold a magnifying glass up to the boots—both literally and figuratively—and explore what they can tell us about Theodore.

Even young Richard, Ethel’s son, is at the peak of children’s fashion in his spiffy sailor suit. Just like his grandfather’s boots, the fringed flag he’s holding and the mysterious object peeking out of his breast pocket are clues Biograph would investigate in order to add vital context to this moment in time.

If you wandered over to the massive bookshelf, you would marvel at the size and scope of the collection—an expensive acquisition in the days before paperbacks were available. The family smacks of sophisticated affluence. The distinctive whiff of ink suggests they value education and learning. Biograph could tell you that Theodore especially was a voracious reader whose varied literary tastes ranged from ancient Greek dramas and military histories to poetry and novels by the likes of Sir Walter Scott and Charles Dickens. Some of those books on the shelf may even be his own—during his life, he published books on history, travel, nature, and his own adventures, among other topics. The paintings and sculptures on the periphery of the image suggest the family appreciates culture as well.

But the feature that might make the greatest impression on you is the adoration on each person’s face as they stare at the infant cradled in Theodore’s arms—his grandson, Archibald. Every other aspect of the scene may seem foreign, but the warm welcome for a new family member is something you’ve seen in your own family many times before.

That Theodore could be convinced to sit still for this portrait is telling. With context from Biograph, you would learn he was known for his boundless energy and zest for life. However, by 1918, his health was failing; he would pass away on January 6, 1919, not too long after this picture was taken. His last recorded words, spoken to his family servant, were “Please put out that light, James.”

Photographs of the people you love passed on without these detailed captions will eventually become grainy portraits of nameless strangers. Biograph preserves the invaluable context of your ancestors’ stories—and your own—for generations to come.

A picture says a thousand words, but not without your voice!